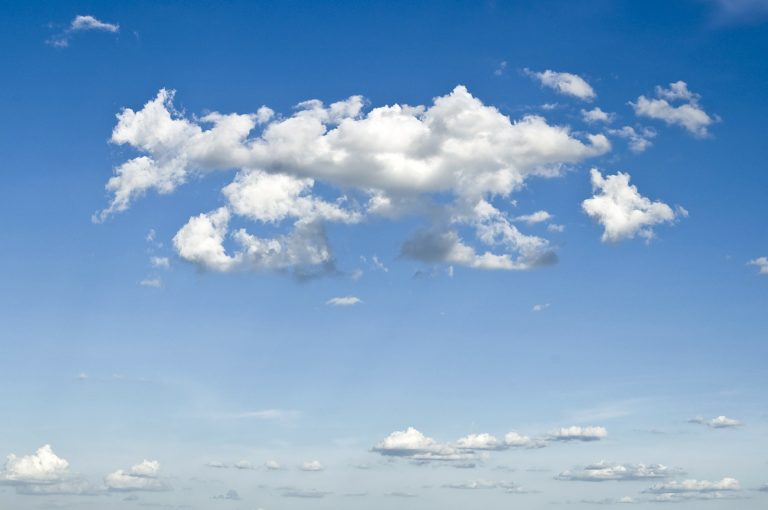 Up in the Air: Why Clouds Float

According to the laws of gravity, what goes up must eventually come down. If that’s the case, then why can clouds stay afloat up in the air for many days until it rains?

Most of us should already know how the water cycle works by now: water evaporates, floats up and condenses into water droplets (or ice crystals), and then falls back down to the ground. But as soon as vapor condenses, how is it possible that water droplets and ice crystals are capable of remaining afloat for long periods of time before falling back down?

We answer this question in today’s article.

To understand how heavy (or rather, how light) water droplets are, we have to understand just how small these droplets are – and they are extremely small. A droplet’s average diameter can go as low as 10 micron up to 15 micron.

How big is that? Well, think of it this way: a micron is 1/1000 of a millimeter. The tip of a freshly sharpened pencil is 200 microns. A grain of sand is 90 microns. A strand of thick human hair is around 70 micron. The smallest water droplets are roughly the size of a speck of dust or pollen. And if you’ve ever seen red blood cells on a microscope before, a water droplet is around five to seven blood cells stacked up together.

For every cubic centimeter, there are a few hundred droplets. So, let’s say a fairly large cumulus cloud measures one cubic kilometer. That would mean it has a billion cubic meters and has around 500 million grams of water droplets. That would mean trillions or even more water droplets in that cloud alone. Given the weight of water, a cloud would then have to weight around 500,000 kilograms or around 551 tons.

So, if one cloud weighed the same amount as four blue whales (the largest animal known to mankind), how is it capable of floating effortlessly in the sky? It does so because a) density is not the same thing as weight, and a cloud is actually less dense than the dry air below its altitude.

Clouds are made of small water droplets and, depending on the temperature, ice crystals. While water droplets individually have their own weight to it, it’s extremely small to have a fall velocity like regular objects would. For example, have you ever been in an old and dusty room where you can visibly see dust particles floating in the air? Technically, these particles have weight, but it’s so small that it does not fall as fast as you might think and appear to float in the air.

You might be thinking something along the lines of, “Sure, droplets on their own can have very minimal weight. But what about the weight of all the water droplets and ice crystals collectively in one cloud?” That’s where factors like air pressure and wind come in.

Clouds Can Still Move and Float

A big misconception a lot of people have is that when you see clouds move, they’re not actually moving. Rather, it’s supposed to be the Earth spinning around and what we actually see is the sky spinning around the clouds, not the other way around.

While the Earth’s spinning does have an effect, you’re not seeing the Earth spinning. Because of gravity, you don’t feel that you’re moving 1600 kilometers per hour while you sit still, right? Because that’s the speed of the Earth spinning, assuming you live near the equator (the speed is much slower if you live closer to the North and South Pole).

But the Earth’s spinning does have an effect on how you see the clouds moving because its spin affects the wind, even in high altitudes. And it’s that wind that makes clouds move in certain directions. In common cases, you can see that the clouds are moving in the direction the wind is passing.

However, it’s common to feel the wind heading east but see the clouds moving west. This is because the winds up there aren’t always moving in the same direction as the wind down here. The random winds can be due to several factors like air movement, and heat from the sun.

How Fast Do Clouds Move?

Despite clouds’ size, a lot of its size and movement deals with the air around it. If you’ve noticed that clouds move, it’s not the cloud itself that’s moving. Rather, it is being moved by the air around it. The air that moves clouds is not only responsible for moving clouds, but also for keeping it afloat; if there was no air to condense water vapor into droplets and move it, then the temperature of the air beneath the clouds would still be constant and prevented clouds from staying afloat – or even existing, for that matter.

A cloud moves as fast as the wind moves. If there is plenty of moisture, water droplets, and ice crystals to form fluffy-looking opaque clouds, the density of the cloud can withstand strong speeds and can move at slower speeds. But if the clouds are thin and wispy, strong winds can not only cause fast-moving clouds, but also break them apart.

Clouds can move both vertically and horizontally, though you’re more likely to see the latter. Usually, you’ll find clouds moving horizontally when the air around a cloud moves towards a certain direction. Because it’s possible for wind to move randomly, you might feel air going one way but seeing the clouds float in the other direction.

However, it’s also possible for clouds to move vertically, though this is less likely. This movement is due to convection where hot air rises from the ground and causes clouds to move upwards where the air is colder.

Let’s recap everything we’ve discussed. Clouds can weigh tons, depending on how big it is, because it can contain a lot of water droplets over time. However, it manages to stay afloat because it isn’t as dense as the air beneath it, allowing it to stay within the cold air at a certain altitude. However, it will continue to move within this altitude until it reaches a certain density when it can no longer hold its weight, causing precipitation.

PrevPreviousThe Science Behind Moving Clouds: Why and How Fast Do Clouds Move?
NextMars Has Clouds, But That Doesn’t Mean the Planet Is LivableNext