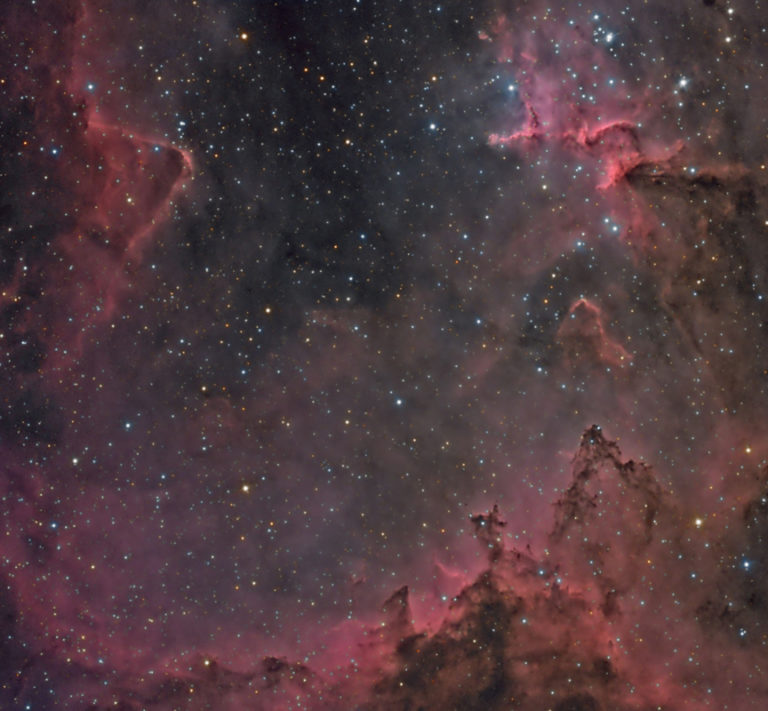 Star Nursery: The Birthplace of Stars

We are all made from star dust. No, literally: 99% of the material in the universe is made of helium and hydrogen, two of the most common ingredients in stars. And while it might seem like most of this collection of star dust is observable in planets, stars, cities, your first love, etc., this isn’t accurate. In fact, a large portion of what makes up the universe floats in the void between worlds. Space, in fact, isn’t as empty as we think.

Dark Matter aside, most of what makes up the known universe is comprised of star dust, or, to put it scientifically, cosmic dust. Unlike the dust we find on Earth –which is comprised mostly of fine bits of dead skin cells, dirt particles, fibers, etc. –Cosmic Dust is comprised of even finer particles of carbon compounds, silicon, oxygen, nickel, nitrogen, and other heavy elements. And by finer, we’re not kidding: a mote of Cosmic Dust is around 1/100th of a micron, which makes 1/10th micron-sized mote of smoke particles seem gigantic.

But what’s so important about Cosmic Dust anyway? Well, they might not seem like much, but they’re actually the seed from which stars grow from. Cosmic Dust is theorized to come from Red Giant stars and Supernovas; they are the remnants of old and dying stars, grains of heavy elements that were once beacons of light in the eternal darkness of space.

Over time, these particles become free-roaming clouds of Cosmic Dust, and after untold eons, some of these particles find their way into the gravitational wells of stellar cauldrons, otherwise known as a star nursery. These Star Nurseries are gigantic nebula clouds that turn Cosmic Dust into brand-new stars, from which new planets and asteroids will orbit.

We’re all made from stardust, but it’s in these star nurseries that we’re actually from!

So, What is a Star Nursery?

While the words “star nursery” might conjure up images of cribs and cute, anthropomorphic stars, the reality is very much different: a star nursery is a region within a nebula that has violent solar winds and extremely high temperatures, all of which are necessary to coalesce and ignite the Cosmic Dust into new stars.

Nebula, or the plural nebulae, originates from Latin, which means “mist” or “cloud.” The nebulae resemble a cloud, because of how they appear as cloudy specks during the night. In truth, nebulae are made up of dust and gas, such as hydrogen and other ionized gases.

A Star is Born in a Star Nursery: The Trifid Nebula

What we know about star nurseries comes from our research into the Trifid Nebula, a gas cloud located in the southern constellation of Sagittarius, approximately 9,000 light-years from Earth.

At 50 light-years wide, the Trifid Nebula is also one of the largest star nurseries that we know of so far. The gravitational waves present in this nebula are also exceptional because of the strength and relative free-flowing state of it, both of which are necessary elements into the creation of new stars and an important aspect of what makes it a star nursery.

The Trifid Nebula takes its name from the way that it is trisected; Trifid is a word that describes something that was divided into three lobes. Because of its size and relative position in the galaxy, the Trifid Nebula also allows us to see the three different kinds of naturally occurring nebulae in the Universe: reflection nebula, absorption nebula, and emission nebula.

Along the upper portion of the Trifid Nebula is a region known as a Reflective Nebula. A reflective nebula scatters light from bright, new stars that are born from the Trifid Nebula. Of all the light particles present, blue is the one that’s scattered the most in this nebula, giving it a sky-blue tint that makes it look like the skies we have on earth. Unlike the atmospheric gases that scatter light in our planet, however, the blue tint of the Reflection Nebula within the Trifid Nebula comes from Cosmic Dust that carries a blue hue.

A polar opposite to the Reflection Nebula, the Absorption Nebula is a region of Trifid space that is rife with dark, veinous stretches of gas and dust. These dark lanes are known for their light-obscuring properties and are where the remnants of star afterbirths coalesce. Over time, the gravitational pressure within this region will force the Cosmic Dust into extremely dense formations (though not as dense as a black hole), raising its temperatures and triggering nuclear fusion from within.

Once these stars are of a dense and hot enough state, they pass through the Absorption Nebula (also known, quite aptly, as a Dark Nebula) and onto the third nebula present in the Trifid.

The largest, most brilliant aspect of the Trifid Nebula, the Emission Nebula is what we can truly consider as a star nursery: an expansive bubble of red-hot hydrogen gas molecules several light-years wide. The light emitted by this nebula comes from the hundreds and thousands of new stars being birthed in its vicinity. Because of how hot these new stars burn, their light comes out as red-orange, similar to how neon gases light up in signs.

Where True Stars Are Born

Massively bright, a star nursery is one of the engines of the universe, ensuring the constant survival of this strange space of reality we occupy. Of course, eventually, they too will succumb to the inevitable entropy of the universe, and eventually into the abyss of nothingness in space.

But until then, let’s give a big thanks to the star nurseries where true stars are born.

PrevPreviousThe Evolution of Marketing: How Marketing Has Evolved Throughout the Years
NextWhy Does My Dog Eat Grass? They’re Either Hungry or BoredNext