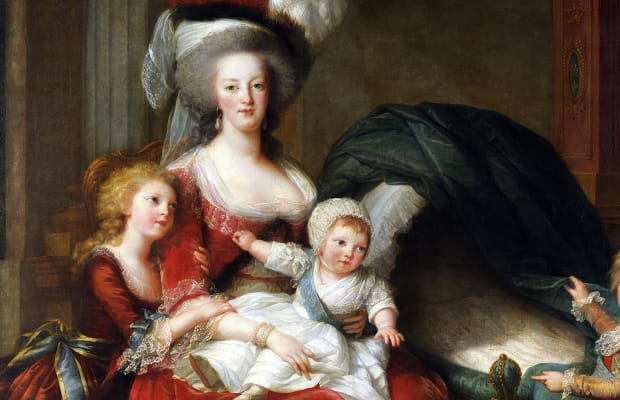 Starting in 1789, the French Monarchy, which had ruled over its people with a brutal and decadent iron fist for over 200 years, was toppled by the French Revolution. Over the course of a few years, the Ancien Régime was systematically dismantled and abolished under the auspices of the revolution’s credo: Liberté, égalité, fraternité.

However, no revolution can come without bloodshed, and the revolutionaries needed to dispatch of their former overlords, with King Louis XVI being the first on the guillotine’s chopping block on August of 1792. A little over a year later, Marie Antoinette, controversial Queen of France, was put to trial, and then sentenced to death, in just a little over 2 days. On October 16, 1793, she was executed via guillotine in a public square in Place de la Révolution (the present-day Place de la Concorde).

Accounts at the time described Marie Antoinette as looking disheveled but dignified, as to be expected from a former monarch about to be put to death. But there was one, striking detail: from the time of her initial arrest to her trial and eventual execution, her hair had gone completely white in the span of just a few months.

What is The Marie Antoinette Syndrome?

“The first time I saw her majesty after the unfortunate catastrophe of the Varennes journey [a previous escape attempt that failed dramatically] … she took off her cap and desired me to observe the effect which grief had produced upon her hair…It had become, in one single night, as white as that of a woman of seventy.”

The phenomenon of ‘shocking’ someone so profoundly that it turns their hair white instantly or overnight is one that is well-documented in anecdotes and myth, but not so much in medical literature. In fact, it wasn’t until 2009, when researchers from the University of Zurich dubbed the phenomenon Canities Subita, or, the Marie Antoinette Syndrome.

“There are no living cells in the hair…Psychosocial stress can’t affect the hair fiber that’s already formed, it can only affect the fibers as they’re forming.”

Various other medical journals claim that Marie Antoinette Syndrome is a medical impossibility, with some researchers claiming that there is no organic mechanism within the body that could turn hair completely white overnight. Some scientists argue that, even if it were possible, the visible effects would need days, weeks, even months to manifest because they believe that only the roots would be affected by heretofore unknown factors. Basically, the susceptibility of a stressful lifestyle to a disease or condition like Marie Antoinette Syndrome is practically impossible.

And yet, history disagrees.

The Marie Antoinette Syndrome Throughout History 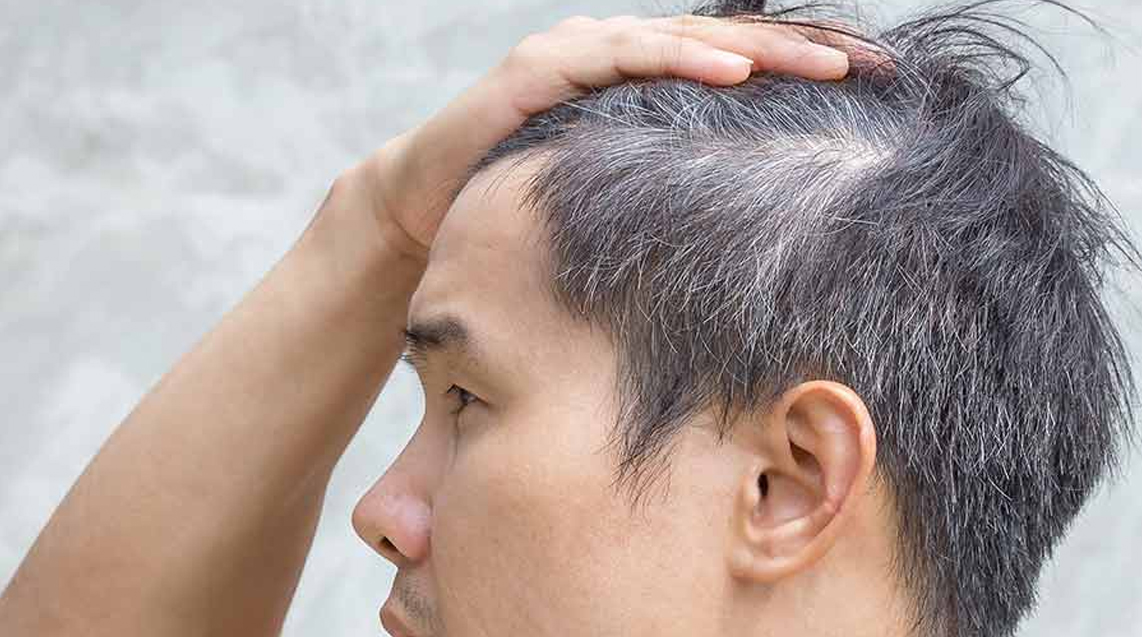 Throughout recorded history, the phenomenon of hair turning white overnight or going prematurely gray in a drastically short period of time is so well-known that it has become part of common knowledge, although the veracity of this knowledge is questionable.

Other than our brioche-loving Queen, there are numerous reports in history –from Continental Europe, the various Chinese dynasties, and even in the various African kingdoms where knowledge was passed down mostly orally –of people experiencing a sudden change in hair color after a traumatic experience.

Of these examples, two of best-documented ones come from England: Thomas More and Mary, Queen of Scots. Thomas More was an English barrister in 1535 whose hair had allegedly turned completely white right before Henry VIII had him executed for treason. The same goes for Mary, Queen of Scots. It seems that facing the prospect of having your head severed from your body is a traumatic experience. And this isn’t to mention all the other examples from commoners that didn’t make it into the medical literature.

How Do You Get Marie Antoinette Syndrome?

As our understanding of medicine improved, scientists tried to explain away the Marie Antoinette Syndrome with a more common, less exotic condition: Alopecia Areata. With Alopecia Areata, the body’s auto-immune response is triggered by sudden and drastic increases in stress, leading to pigmented hair to completely fall out.

Unpigmented hair would stay safe, making it look like a person’s hair had turned completely white or prematurely gray overnight. And it makes sense: of the documented examples of Marie Antoinette Syndrome, none of the eyewitness accounts stated whether the person’s volume of hair had also thinned out, especially since most of the documented examples usually involved prisoners awaiting a beheading, which meant their hairs were mostly shorn prior.

Many dermatologists agree with the conclusion that Alopecia Areata is what causes the sudden change in hair color, stating that it is within the realm of possibility for sudden stress to cause this condition in people, with scientists even agreeing that the process, while not overnight, could turn a person’s hair completely white over the course of a few days to a couple of weeks.

Scientists argue that the lack of medical knowledge during the medieval times contributed to a misunderstanding of the mechanisms that govern hair production, with researchers stressing that the immune system –a relatively ‘new’ concept that wasn’t explored until the late 19th century –was the most influential factor in hair loss, and not shock and trauma.

That being said, scientists are slowly uncovering major connections between stress and the immune system, and just recently, scientists are also discovering causal relationships between external stressors, an individual’s immune response, and hair color.

The (Potential) Science Behind the Marie Antoinette Syndrome 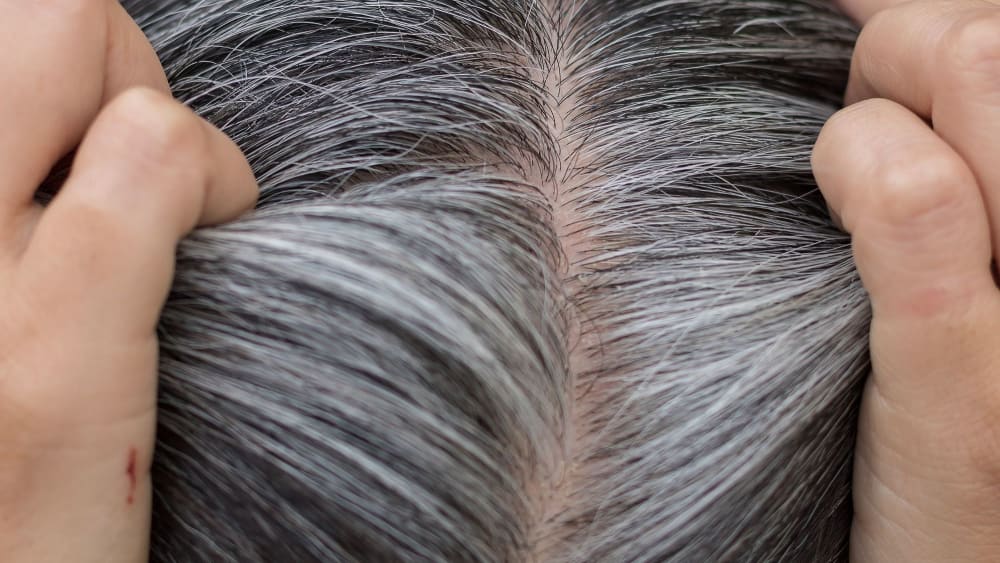 A potential, organic mechanism behind the Marie Antoinette Syndrome was by researchers from Harvard University back in 2020 and is currently being explored. To determine this, scientists exposed lab mice to a wide variety of external stressors during different stages of their hair growth.

Scientists discovered that, with every exposure, the hair follicles in the mice had lost an important stem cell responsible for producing pigment: the melanocyte stem cells. Given enough time and stress, the mice were eventually left completely white, seemingly confirming the Marie Antoinette Syndrome.

However, another side effect the researchers noted was that the effects of the Marie Antoinette Syndrome were practically permanent. Senior author of the study, Ya-Chieh Hsu, explains the finding:

“When we started to study this, I expected that stress was bad for the body – but the detrimental impact of stress that we discovered was beyond what I imagined…After just a few days, all of the pigment-regenerating stem cells were lost. Once they’re gone, you can’t regenerate pigments anymore. The damage is permanent.”

Despite this, the exact process leading to pigmentation loss in hair is still being studied. For now, the Harvard researchers are operating on the assumption that Marie Antoinette Syndrome is caused by an autoimmune response; however, when they tried to experiment on mice with autoimmune conditions, the scientists were unable to generate any significant results. Autoimmune conditions usually present a wide variety of symptoms, from diaphoresis to acne. Changes in hair color, however, aren’t in the list.

Although researchers firmly believe that external stressors are to blame, the stress hormone cortisol was also found to have little-to-no significant impact on melanocyte cells. In fact, the Harvard researchers went so far as to remove the adrenal gland of some mice to see if it will have any effect on the presentation of the Marie Antoinette Syndrome. But despite removing the gland responsible for producing cortisol, the mice’s hair still turned white and/or gray under the influence of external stressors, even with the use of quality antibody purification resins.

However, scientists are exhausting all possible explanations using the immune response theory; after all, cortisol isn’t the only stress-related hormone that the body produces. Noradrenaline, an important neurotransmitter produced by the sympathetic nervous system, is the prime suspect in causing Marie Antoinette Syndrome.

Noradrenaline is also known as the fight-or-flight hormone, as it is responsible for regulating unconscious action and responses. Acute stress that is brought about suddenly and drastically triggers the body’s fight-or-flight response, giving us the necessary adrenaline we need to either fight off any potential threat or run away from it. It’s an important evolutionary product that has allowed organisms to survive external stressors like being hunted by predators or running away from natural disasters.

In the case of the Marie Antoinette Syndrome, scientists believe that Noradrenaline not only primes us for fight-or-flight, it also depletes our melanocyte stem cells, leading to a premature whitening of our hair.

So is The Marie Antoinette Syndrome Real?

The study is still ongoing, but it’s generating a lot of waves in the scientific community, with many doctors and researchers changing their tune about the existence of Marie Antoinette Syndrome. That being said, although scientists have potentially found a how, they have yet to discover a why.

One of the prevailing commentaries on the matter seems to point to an evolutionary holdover from our primate cousins. In troops of silverback gorillas, researchers have found that the oldest gorilla, usually almost completely greyed out by age, is almost always the troop leader. Some researchers have commented that this is a possible explanation: we as a species have evolved to view grey or white hair as a sign of not just age, but also experience and wisdom.

Scientists believe that animals that have developed grey or white hair have a higher perceived place in the social hierarchy because the rest of their society sees them as having ‘earned’ their hair through the stress of experience.

Of course, at the end of the day, the Marie Antoinette Syndrome isn’t something anyone should undergo, as it does involve high levels of emotional, mental, and psychological trauma. That being said, studying the Marie Antoinette Syndrome is opening up new and exciting opportunities for medical researchers, from innovating cancer management practices to the creation of novel immunotherapy procedures.

The eponymous Queen, once vilified for being a treasonous and scandalous wastrel of public funds, is now being vindicated by historians, with many agreeing that, while Marie Antoinette was out of touch, she was far from malicious, and today, she is helping us improve our quality of life after extreme stress.