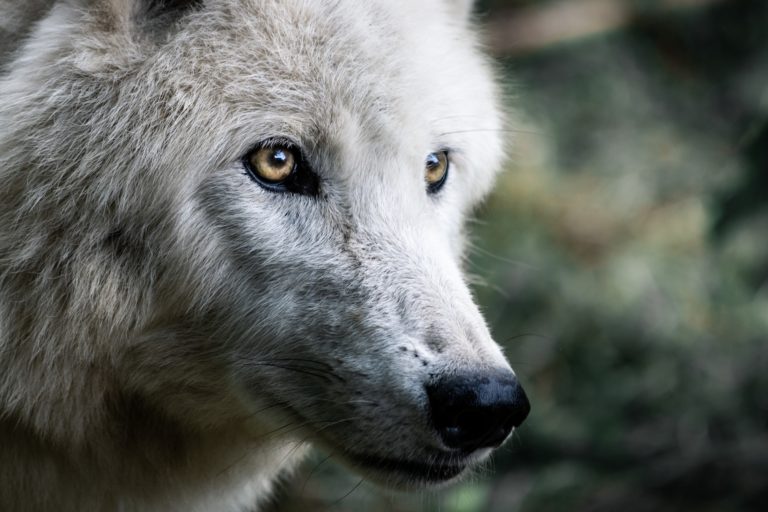 Who’s Afraid of the Big Bad Wolves: The Largest Wolf in the World

As the song goes, who’s afraid of the big bad wolf?

Well, if you knew just how big the largest wolf could get, you’d be right to be afraid.

Some of the smallest wolves are just a few inches bigger and a lot lighter than the world’s biggest dog (a 44-inch Great Dane named Zeus), while even the biggest dogs may be no match against young wolf pups. And with their predatory hunting skills, coming across one of these wolves in their natural habitat with no way of defending yourself can be dangerous.

Wolves are carnivores that belong to the Canidae family. They’re a distant relative of the domesticated dog, but there are more closely related to its other more feral canid family members such as coyotes, foxes, or jackals.


Where Do Wolves Live?

Wolves live all over the Earth, inhabiting both hot or cold environments, depending on their species. As of writing, there are only 40 recognized wolf subspecies. Most of these subspecies can be classified as gray wolves, which live in cold climates.

If we’re talking about the largest species, then it’s right for people to assume that gray wolves are the largest type of wolf and can compete with some of the biggest animals in the world. But this species can be broken down to hundreds of sub-species that range in sizes and can on;y be found in specific areas in the world.

How Big Are Wolves?

Technically, people are right when they say that the gray wolves are the biggest wolves in the world, but that’s only because the top five biggest wolf species happen to fall under the gray wolf category. However, we can still narrow down to what specific species of wolf is the biggest.

The average wolf can weigh 37 to 40 kilograms (depending on its sex) and measure up to 160 cm in length and 85 cm in height. Their size makes them the apex predators in their environment, so they are very dangerous when spotted in the wilderness.

In terms of size, wolves aren’t the biggest animals in the world. But because of their ferocity, size, and nature, coming across wolves in their natural habitat can be dangerous for the average person.

How Long Do Wolves Live?

Despite wolves’ ferocity, they only have an average life span of a wolf living in the wilderness is up to eight years, according to National Geographic. This is actually much shorter than the average dog lifespan, which is 10 to 13 years. This may be due to the fact that wolves are hunted for sport and may be killed by larger prey (like deer) when it tries to hunt.

However, many areas often hunt wolves for sport, so some sub-species may be at risk of extinction. Generally, however, wolves are classified as a Least Concern as there are over hundreds of thousands of them around the world.

The average gray wolf (or grey wolf) weighs around 45 kilograms (around a hundred pounds), with most females weighing less than males. Gray wolves aren’t exactly gray: some of them can have brown, black, and white bushy fur to protect them in cold environments. They are identified by their blunt ears, muzzles, broad foreheads, snouts, and large jaws used for their carnivorous appetite.

There are over 300,000 gray wolves spread across the world. While you’ll often find them in colder environments, it’s not uncommon to see them in other environments as they are capable of adapting to certain climates to survive.

They often travel in packs, which usually sums up to a dozen wolves per pack. These packs hunt and survive together, but like lions, it’s not uncommon for some wolves to leave the pack due to insufficient resources or the need to mate with another wolf they aren’t related to.

Unlike other animals like chickens where roosters mate with any hen they see, wolves are monogamous and mate with only one other wolf. They only look for a new mate when their partner dies.

As mammals, gray wolves reproduce sexually. Female gray wolves carry to term for about two to two and a half months before giving birth to a litter. In one birth, a gray wolf can give birth to up to six pups in the summer, but in some cases, there could be more or less.

One pup can weigh as much as 500 grams, which means a gray wolf pregnant with half a dozen pups could be carrying around three kilograms, which is roughly the size of a slightly plump newborn human baby.

Fun fact: did you know that gray wolves are born blind and deaf? They require their mother’s assistance for the first two weeks because they are unable to see and hear. It’s similar to the way newborn puppies and kittens are born with their eyes closed and use their sense of touch and smell to find their mother.

The third biggest wolf of the bunch is the Tundra Wolf, also known as the Canis lupus albus. At 125 pounds, this wolf can grow as long as 7 feet in length. The average human may be taller than this wolf, but with its average weight matching the average-sized person and its sharp predator skills, getting into a fight with one can be extremely dangerous.

Despite its size and capability, however, Tundra Wolves exercise selective predation. They choose old and feeble bison and oxen or animals they have a clear chance of killing.

There are around 40,000 of these wolves scattered across Northern Europe and Asia, but due to their beautiful coats of fur, the Tundra Wolf was hunted by humans for their pelts. Thousands of them still exist in the northern arctic, but not as much as there once were before excessive hunting stopped.

The second biggest wolf is the Canis lupus lupus, also more commonly known as the Eurasian Wolf. While it’s a lot stouter than the Tundra Wolf with an average 5-foot length, it makes up in weight with an average 160 pounds, making it much bigger than the former. These wolves are exclusive to Northern Europe and China, with around 30,000 of them scattered across the continent. Most of them are in the colder areas of Russia.

The Eurasian Wolf has a slender build and is distinguishable by its short, coarse coat. They’re often seen with dark cream coats, but you can also find Eurasian wolves with red, black, gray coats or a combination of multiple colors.

While these wolves are predators, they aren’t picky about the prey they hunt. Aside from the typical herbivorous animals like sheep and deer, the Eurasian Wolf is not above hunting rodents and lizards, especially when they can’t find any other prey to hunt.

Lengthwise, it has the same size as the Tundra Wolf at 7 feet. But it outweighs both the Tundra and the Eurasian Wolf by at least 15 pounds with an average weight of 175 pounds. Its size makes it incredibly difficult for an average human to win a fight against the Mackenzie Valley Wolf.

Aside from the Mackenzie River, these wolves can also be found in Alaska. Despite their massive size, however, you’re less likely to find them in the wilderness compared to other wolves. The Mackenzie River Wolves’ packs aren’t as large as the other two types of wolves, with only around 10,000 of their species recorded in existence. The silver lining, however, is that they live in a vast ecosystem where wolves of their nature can thrive.

Aside from their massive size, the Mackenzie Valley Wolf differs from other gray wolves because of their stronger limbs and bigger lungs. These allow them to breathe better in higher altitudes.

What Are the Smallest Wolf Species?

Just for comparison, now that you know how big the largest wolves can get, what is the smallest type of wolf that exists? It is the gray wolf subspecies known as the Arabian Wolf or the Canis lupus arabs.

With an average height of roughly two feet and a weight of 45 pounds, it’s not a very dangerous predator compared to its formidable distant cousin the Mackenzie Valley Wolf. It’s believed that its size was to help it adapt to hotter, drier climates like deserts, where Arabian Wolves are commonly found.

Arabian Wolves are far from the top of their ecosystem’s food chain. Thus, they are omnivores and can survive on plants. For meat, they eat small to medium-sized prey, the remains of carcasses of prey killed by larger predators, and the meat found in garbage bags.

Dire Wolf: Did It Really Exist?

Chances are you became aware of dire wolves from The Game of Thrones. And many wonders if they really existed.

The legendary dire wolf existed in ancient times and was one of North America’s famous predators about 250,000 to 13,000 years ago. But it mysteriously disappeared and scientists couldn’t pinpoint the exact time of its extinction.

If you’re wondering just how big dire wolves really are, well, based on the skeletons found, they were about 20% bigger than the modern gray wolves. It’s also likely that they traveled in packs and hunted down bison and horses. Perhaps even baby mammoths!

Just because they’re big and carnivorous does not give anyone an excuse to hunt down these wolves and thin down their numbers. Left alone in their natural habitat, wolves won’t go searching for the nearest town to hunt for humans, especially when they’re left to their own natural habitat filled with enough prey for them to feed on.

While these wolves won’t tower over you should you come across one in the wilderness, their hunting skill, size, and weight will all be to their advantage.

PrevPreviousMars Has Clouds, But That Doesn’t Mean the Planet Is Livable
NextWhat’s the Difference Between a Komodo dragon from Other Monitor Lizards?Next

Starting an online business can be a great way to make money from home. There are many ways to start an online

In the past, hospitality has been defined by providing a place for travelers to sleep and eat. However, there has been an