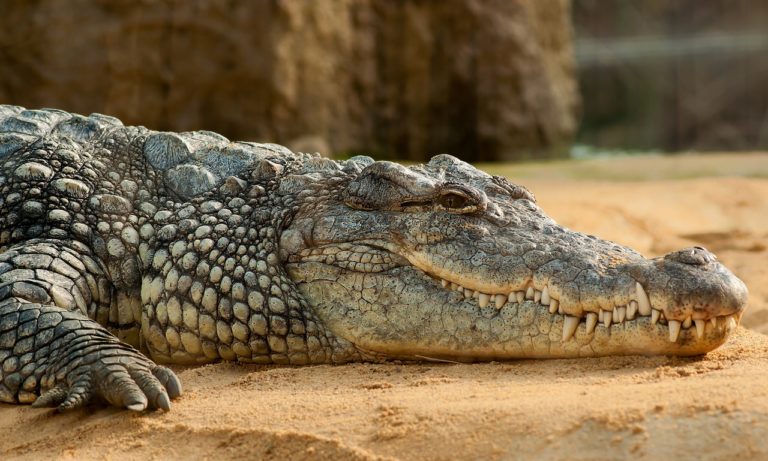 The Largest Crocodile Ever Recorded and Caught

The world is full of deadly animals that can prey on humans in the wilderness. Animal attacks from venomous and non-venomous animals account for thousands of causes of human deaths in the United States and cost $2 billion a year in healthcare costs.

Surprisingly, the deadliest animal in the world is not one of the largest, but one of the smallest on the list: the mosquito. And if you think sharks or on this list, you’re wrong. It’s been eclipsed by another predator you may not have expected: the crocodile.

Crocodiles kill over a thousand humans a year. With their large build and vise-like jaw, an attack from some of the largest crocodiles can be lethal. But just how big can a crocodile get?

Crocodiles are a carnivorous reptile found in many types of environments all over the world. They have an average lifespan of 70 years, though some subspecies can live much longer.

National Geographic claims that crocodiles are the animal most likely to eat a human. Other animals with a higher human body count usually kill humans through transmitted diseases, venom, or bodily injury. But if an unlucky human ever come across a crocodile, there is a chance that the crocodile will try to eat a human with its vise-like jaw.

Saltwater crocodiles have the strongest jaws in the animal kingdom – beating even the T. rex in terms of force. This means that if you do find yourself wrestling with a crocodile, you have a better chance if you can keep its mouth shut; once it opens its mouth and clamps down on you, it’s nearly impossible to manually pry its mouth open.

How Big Is a Crocodile?

The average male crocodile can grow as much as 17 feet from snout to tail and can weigh around a thousand pounds when matured.

Matured female crocodiles are generally smaller. And while the largest recorded crocodile measures at 20 feet, some believe that there are much bigger ones that prey the wilderness.

What Do Crocodiles Eat?

Crocodiles are carnivores, which means they only eat meat and prey on animals in their environment as well as unfortunate humans who may wander near their habitat. They are opportunistic predators, they do not actively hunt unless potential prey wanders in their sight.

Because of their place in the food chain, they are at low risk for extinction. However, crocodiles are killed for sport, to protect nearby human communities, and for high-end luxury goods that use genuine crocodile hide. Leaving these threats unchecked, the global crocodile population may become endangered.

Cassius measures 18 feet or 5.48 meters in length and weighs around 2,200 pounds or 998 kilograms. As of writing, he is believed to be over 110 years old. Cassius gets his name from the birth name of the boxer Muhammad Ali, Cassius Clay. Because of his age, Cassius is missing the tip of his snout, one of his front legs, and the tip of his tail.

The largest crocodile ever recorded is the massive monster known as Lolong, a male saltwater crocodile found and captured in the Philippines. From snout to tail, Lolong measures at 6.17 meters or a little over 20 feet, making him the largest crocodile measured lengthwise. He weighs around 1,075 kilograms or 2,370 pounds.

Lolong was found in a creek in the southern Philippine province of Bunawan, Agusan del Sur in September 2011. He was so big that it took three weeks and the collective effort of around 100 people consisting of residents, local government officials, and professional crocodile hunters to capture him.

By the time he was captured, Lolong was believed to be 50 years old. The crocodile got its name ‘Lolong’ in honor of one of the crocodile hunters who led the mission to track down and capture the giant crocodile, but died days before its capture. Lolong was believed to be the culprit behind several missing water buffaloes, a fisherman, a young local, and several animal attacks.

Two months later, National Geographic crocodile expert Adam Britton measured Lolong and confirmed that he was the largest crocodile ever recorded, caught, and placed in captivity. In June 2012, the Guinness World Records officially certified Lolong as the world’s largest crocodile, beating out Cassius by three feet.

Lolong was kept in captivity in an eco-park in Bunawan and became an attraction used to boost tourism and local income. However, he died in February 2013 from cardiac arrest due to pneumonia and fungal infection. His remains were taxidermized and are on display at the Philippine National Museum of Natural History in Manila.

While Cassius and Lolong sit on their thrones as the biggest crocodiles ever put in captivity, it’s believed that crocodiles much larger than these two exist. But the reason these crocodiles aren’t in the Guinness World Records is that they are so large and dangerous to capture that no one can scientifically verify their sizes.

For instance, after Lolong was declared the largest crocodile ever captured, the team of crocodile hunters claimed that there was a much larger crocodile causing human and livestock deaths.

So, here is a list of crocodiles that are allegedly much longer than the 20-foot Lolong. Because these crocodiles are said to be much bigger based on word of mouth or incomplete data, it’s important to take these crocodile sizes with a grain of salt. Although saltwater crocodiles like Cassius and Lolong are huge in their own right, the largest prehistoric crocodiles ever recorded put their size to shame. Take, for instance, the Sarcosuchus imperator, dubbed the mega-predator ‘super-croc’ by zoologists.

The super crocodile measured as long as 12.2 meters or 40 feet – that’s as twice as long as Lolong in his prime. The Sarcosuchus imperator also weighed 8 tons or 17,600 pounds – seven and a half times Lolong’s weight!

These measurements are based on the skeletal remains excavated in Africa. It was believed the Sarosuchus lived in the Mid-Cretaceous era 112 million years ago. This meant it was alive during the time of the Spinosaurus and the Microraptor. According to paleontologists, the Sarosuchus may have been a type of Crocodyliformes, ancestors to the crocodiles today.

Saltwater crocodiles live in swamps, freshwater regions, and any bodies of water that provide access to land and sea prey. They’re most popular in India, Southeast Asia, and northern Australia, but they can be found in other places in the world.

It’s highly unlikely you’ll see one, and given the size a deadly crocodile can grow into, you’re unlikely to miss it.