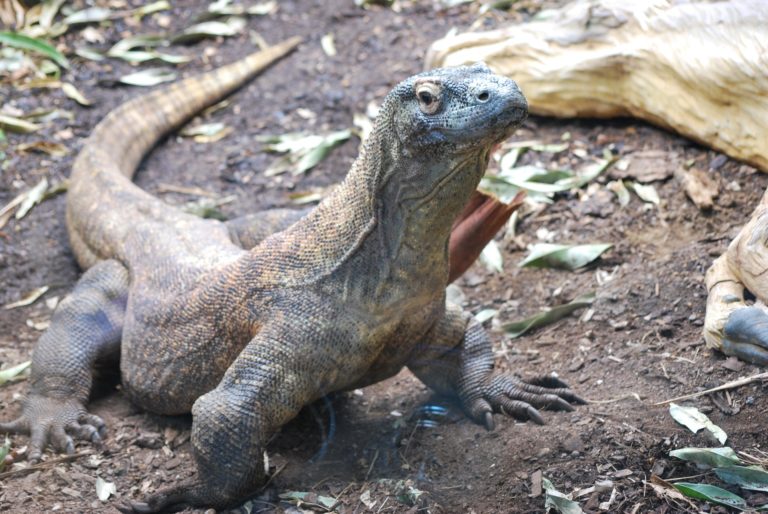 What’s the Difference Between a Komodo dragon from Other Monitor Lizards?

When it comes to everyday animals like cats, dogs, and fish, it’s easy to tell the difference between different members of each family. For example, most people can tell a Dalmatian from a Chihuahua or a goldfish from a Betta fish. But when it comes to breeds of other animals a like an Ameraucana or a Serama (yes, those are actual chicken breeds), not many may be familiar.

A Komodo dragon is a monitor lizard.

Komodo dragons are members of the Varanidae family, a group of both carnivorous and frugivorous lizards. Specifically, the Komodo dragon is one of the 80 mostly carnivorous species belonging to the Varanus genus.

While fossils suggest that the Komodo dragon’s ancestors had already looked similar to it during its time, the first time a Komodo dragon was recorded was in 1910 when Europeans exploring Indonesia followed rumors of a crocodile that lived on land in the Dutch East Indies (known now as modern day Indonesia). The first paper about the Komodo dragon was published two years later when the director of the Zoological Museum in Java received specimen samples from a collector.

However, the Komodo dragon would not be caught and shipped outside of its origins until 1927, when two live ones were shipped to the Reptile House at London Zoo. Fun fact: the difficulty of the man who managed to collect samples and Komodo dragons to show off to the west actually inspired the popular movie, King Kong in 1933. Because of its growing popularity in the west, however, the Dutch made hunting Komodo dragons illegal and regulated the lizards that were taken for study.

It’s no surprise why early explorers would mistake the Komodo dragon for a crocodile, given its similar body structure. Komodo dragons have long bodies with a tail that’s almost the same size of its abdomen. It has serrated teeth, rough skin, and crawls on four limbs. However, a crocodile has a longer mouth and more visible teeth. You could easily identify a Komodo dragon from a sea of crocodiles based on its color, mouth shape, and how a Komodo dragon’s legs keep its body away from the ground (compared to how crocodiles’ bodies are right on the ground).

Unlike its relatives whose skins are used for leather, however, the Komodo dragon’s skin isn’t very suitable for leather products. Its skin has small bones called “osteoderms” which reinforce its skin against predators, giving it a rugged texture.

It’s the biggest member of its family.

The Komodo dragon is the biggest extant monitor lizard, with some growing as long as 3 meters long and weighting around 70 kilograms. It used to come second to its cousins, the giant lizards under the Megalania genus that went extinct as late as 50,000 years ago. But had they been alive, fossil evidence suggests that the largest of them could have been 7 meters long and up to 620 kilograms.

Their size makes them one of the more dangerous lizards to deal with, but it also means they cannot climb trees in the way that smaller monitor lizards can. However, aside from size, they do share similarities like color (usually gray or brown skin) and body proportions. If we were to shrink a Komodo dragon, it could actually look similar to many of the smaller monitor lizards like the Bengal monitor. However, due to its size and weight, baby Komodo dragons stand out from other monitors because of their thicker, stubbier legs and shorter tail. Most monitors are much more slender in comparison.

In an ecosystem where a Komodo dragon exists, it dominates the ecosystem where it lives. Komodo dragons feed on any prey, from invertebrates down to mammals it comes across. Because of its location in Indonesia, it feeds mostly on Timor deer and any carcass it can find. There have been many reports where a Komodo dragon attacked humans it comes across. It was once believed that Komodo dragons were venomous, but this was disproven. Instead of venom, the glands in dragons’ jaws are actually anticoagulants that prevent clotting.

Komodo dragons naturally exist in only five islands in the world.

Komodo dragons live exclusively in Indonesia, so if you’ve seen it anywhere else in the world, it was probably taken from Indonesia. Naturally, Komodo dragons can only be found in Komodo, Indonesia and four smaller islands nearby: Rinca, Gili Montang, Gili Dasami, and Flores. In contrast, other species of monitor lizards can be found scattered across Africa, Asia, and Australia.

The Komodo dragon is the most dangerous lizard in the world.

While the Komodo dragon has become a tourist attraction in Indonesia, there’s a reason why local guides are careful not to let tourists get too close. Because of their size, weight, predatory skills, and carnivorous diet, they can be dangerous to humans. Despite their size, they have the ability to run, attack, and even kill human beings.

And while it’s been disproven that their bites are venomous, their anticoagulant toxins prevents blood clotting. In any other animal bite, your blood would try to slow down bleeding by beginning the clotting procedure. But with a Komodo dragon, a bite victim could go into shock from losing blood rapidly, assuming they aren’t infected by the bacteria in the Komodo’s mouth.

Komodo dragons are carnivorous, and while they’re not against eating the remains of an animal they did not kill, they still frequently ambush their victims. Komodos know how to kill swiftly by aiming for the throat and using a combination of bodily injuries and blood loss.

PrevPreviousWho’s Afraid of the Big Bad Wolves: The Largest Wolf in the World
NextWhat Are the Differences Between Eubacteria and Archaebacteria?Next