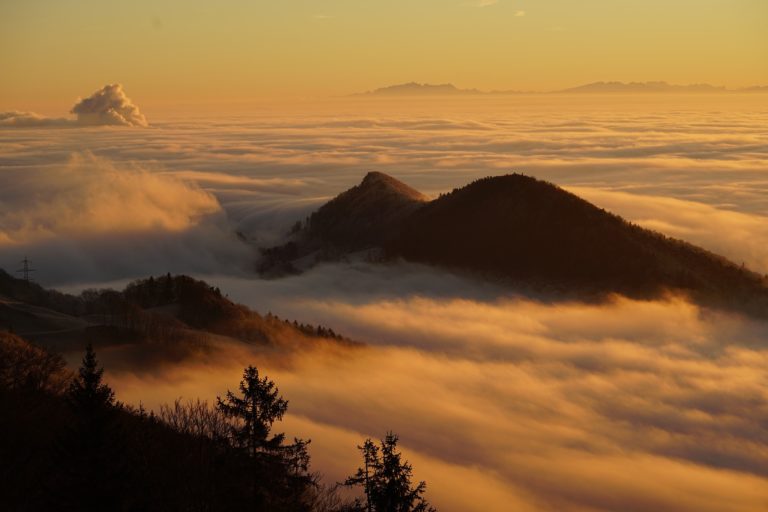 The Science Behind Moving Clouds: Why and How Fast Do Clouds Move?

If you’ve ever been outside on a fairly cloudy day, you might have noticed that clouds hardly ever stay still. Sometimes, you might see them moving ever so slightly, like you wouldn’t notice they were moving until you looked away and looked back up a few minutes later. Other times, you might have also seen a cloud visibly moving across the sky.

The truth, however, is that clouds aren’t actively moving on their own. What you’re looking at is actually the product of condensed water vapor being blown away by the atmosphere in the sky. In this article, we’re going to explain why clouds move and how wind determines the speed of how fast (or slow) clouds move and how that also determines clouds’ shape.

Are Clouds Moving or Is the Earth Just Spinning?

A big misconception a lot of people have is that when you see clouds move, they’re not actually moving. Rather, it’s supposed to be the Earth spinning around and what we actually see is the sky spinning around the clouds, not the other way around.

While the Earth’s spinning does have an effect, you’re not seeing the Earth spinning. Because of gravity, you don’t feel that you’re moving 1600 kilometers per hour while you sit still, right? Because that’s the speed of the Earth spinning, assuming you live near the equator (the speed is much slower if you live closer to the North and South Pole).

But the Earth’s spinning does have an effect on how you see the clouds moving because its spin affects the wind, even in high altitudes. And it’s that wind that makes clouds move in certain directions. In common cases, you can see that the clouds are moving in the direction the wind is passing.

However, it’s common to feel the wind heading east but see the clouds moving west. This is because the winds up there aren’t always moving in the same direction as the wind down here. The random winds can be due to several factors like air movement, and heat from the sun.

How Clouds Are Formed

We’ve covered how clouds are created in a previous article Flat Clouds, Round Clouds, Wispy Clouds: The Science Behind Clouds and Their Shapes, but here’s a quick recap: clouds are formed as part of the water cycle when water vapors float up the air to a certain altitude in the sky.

The sun heats up the ground and evaporates water via evaporation and transpiration. When this vapor reaches a certain altitude, the air has become too cold for the moisture to rise up, so it condenses into the water droplets and ice crystals that make up the clouds.

There are various factors that affect a cloud’s shape. If more water vapor continues to float up, it can push older water droplets upwards, forming a cloud with a puffy top. If you’ve noticed how most clouds have a flat base, this flat line is actually the point where the atmosphere starts to get too cold for vapor.

Wind can also affect the shape of a cloud. Because it’s possible for wind to randomly move around clouds, it can push two clouds together, separate chunks off a cloud, or make some parts of a cloud look thin and wispy.

How Fast Do Clouds Move?

Technically, it’s not the clouds that are moving. Rather, it’s the wind and air that passes through or around the clouds that make it appear like it is the one moving. In reality, if a cloud were to remain in the same place with no wind moving on it, its temperature wouldn’t be cold enough to condense water droplets and it would have remained as water vapor.

Therefore, a cloud moves as fast as the wind moves. However, not all clouds can be moved around. If there is plenty of moisture, water droplets, and ice crystals to form fluffy-looking opaque clouds, the density of the cloud can withstand strong speeds. But if the clouds are thin and wispy, strong winds can break apart the clouds.

Because warm air has more moisture than cold air, when cold air passes through it, it drops in temperature to a point where the vapor condenses, causing it to rain. The reason why you feel that the air is slightly warm and humid before it rains is because of the air in high altitude is the cold air sweeping upwards, leaving the warm moisture-filled air at the bottom.

Usually, you’ll find clouds moving horizontally. If you see a cloud on the left side of a mountain one minute, depending on the wind speed, you might eventually see that it has moved to the right side. This horizontal movement is due to wind.

However, it’s possible to notice clouds moving vertically. That is, at one point you might see a cloud much lower slightly rise up further in the sky. This is due to convection, which is rising hot air from the ground moving upwards. This hot air can cause clouds to move upwards where the air is colder.

To sum it up, clouds aren’t really moving, technically. What you do see, however, is the act of water vapor condensing at a certain altitude while also being moved by the wind. While there’s generally no need to be concerned by moving clouds, the speed of its movement can be an indicator of the current or upcoming weather. However, this isn’t always accurate, so it’s best to check in with your local news report or weather app to provide better, more accurate details on the possible weather later in the day.