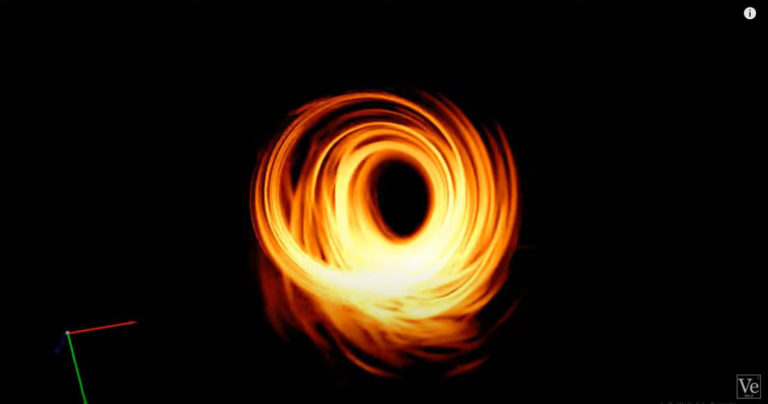 The Black Image: A Glimpse into the Abyss of Galaxy M87

Nietzche once cautioned against staring into an abyss for too long, because eventually, the abyss stares right back. That’s what astronomers from NASA must have felt like when they finally glimpsed the magnetic fields that were theorized to tangle around a black hole.

The “black image”, as it’s being called, was taken by the Event Horizon Telescope, a highly specialized network of advanced telescopes designed specifically to stare into black holes and figure out what exactly makes them tick. The black image is one of the first images of a black hole’s event horizon, where hot, glowing gases are illuminated by the black hole’s magnetic field.

This particular black hole is a supermassive black hole located at the heart of Galaxy M87, and the black image is crucial because it helps scientists understand not just what makes black holes work, but also because it allows us a way to take photos of black holes in general.

The black image is crucial because it allows scientists to take photos of black holes. Here’s the scary thing about black holes: we know they exist, there is overwhelming evidence of their existence, we see what happens to stars and planets that wander too near it. But despite this, we can’t actually see them, although, thanks to Einstein’s predictive theories on gravitational waves, we are able to detect them.

Think of black holes as less of an object and more a point in space: when a supermassive star dies, its sheer mass forces it to collapse into itself. This creates a gravitational anomaly so powerful that it sucks in everything, including light, which is why scientists have had to rely on taking photos of objects surrounding a black hole, rather than the black hole itself.

The black image, taken in March of 2021, is the first actual photo of a black hole, or rather, the first photo of the magnetic field generated by the hot, glowing gases that surround it, thanks to new tech that combines AI, imaging, and the most advanced network of specialized telescopes in the world. It’s the closest we can get to take a photo of a black hole, mostly because the center of it is, in the most empirical sense, a complete and utter void.

This ‘black image’ is significant because it allows scientists to further study the way black holes wolf down matter and then jettison out plasma from its gaping maw, with some of this discharge being launched thousands of light-years away into deep space.

The black image isn’t actually just one photo, but rather, a collection of both images and data collected since 2017. The image itself was taken by the Event Horizon telescope in March of 2021, but it was correlated with data derived from the 2019 photo and data collected from M87 back in 2017.

While the nature of the magnetic fields that scientists found using the black image have yet to be studied in full, they’ve theorized that they must be extremely powerful for them to be able to carry gaseous matter away from a black hole’s center, and by measuring how fast these clouds of gas move, scientists are able to create a working theory on just exactly how powerful it is.

The scientific community is excited as to what sort of new insights they can glean from all of this new information. It seems that, though the abyss did stare back, it allowed us to understand it even further. Now, if only dark matter would do the same!

PrevPreviousWhat Does ‘Room Temperature’ Even Mean?
NextThe Evolution of Marketing: How Marketing Has Evolved Throughout the YearsNext