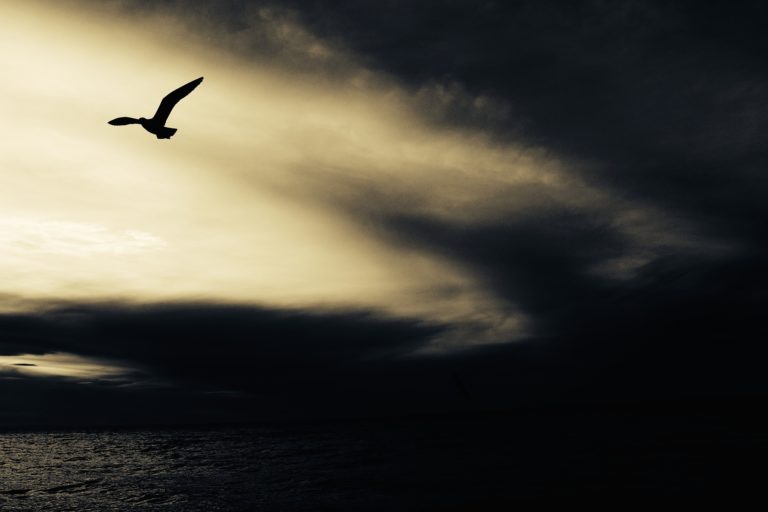 The Science Behind Cloud Colors: Black Clouds vs. White Clouds

On an average day, you’ll find that the clouds in the sky are generally white or light gray at the very least. Sure, it may change color during sunset or sunrise because of the way the light hits it. But you’ll find that, most of the time, clouds have a white color.

To talk about why clouds are white and change color from time to time, we need to understand what’s inside a cloud. As we’ve mentioned in a previous article, clouds are the condensed water droplets which were evaporated from the bodies of water, plants, and other forms of moisture on the ground below.

Clouds form when water vapor reaches a certain altitude where it can start condensing into droplets or, in colder temperatures, ice crystals. Once a cloud gets too dense or heavy, it precipitates and goes back down to the surface in the form of rain, snow, or hail, depending on the temperature and climate.

Clouds Are White Because of the Sun

One thing we have to establish is why clouds look white most of the time. This is mostly due to the sunlight giving clouds their distinctive color. To understand, you have to know a bit about how light and color work. Here’s a video that explains the basics of it:

Do you know how in painting when you mix multiple colors, you only get a certain shade of brown? That’s what happens when you mix all the primary colors together or a primary color with their secondary color. But when we’re talking about light, combining all the colors in the color spectrum produces white light.

Sunlight is white light. When it reaches the Earth’s atmosphere, it is dispersed in all directions because of the gasses and other elements in the air. Because blue light has shorter waves, it scatters more than the other colors, hence why the sky is blue.

Once sunlight reaches the clouds, however, sunlight is scattered equally and is still white, hence the color we see. As sunlight passes through the clouds’ water droplets that are bigger than the particles up in the atmosphere, it scatters equally, thus remaining white. In contrast to the blue sky, we can see the light equally scattered on clouds.

What About Light Gray Clouds?

While clouds are generally white, you might notice that even on an average day some spots of a white cloud can look gray, especially with puffier clouds (as compared to wispier ones like cirrus clouds). These are gray because of the same scattering of light that makes clouds white.

Sunlight often bounces upwards or on certain sides of the cloud, which means some parts of a cloud do not get the same amount of sunlight passing through it. The parts where the sunlight passes through it are white, while those that receive less light have a darker gray color to it.

Clouds that become big enough to have gray spots are because they have become so big that less light can pass through the bottom or base area. It’s also possible that stratus clouds (which looks like a thick blanket over the sky) can cover up the entire sky, which results in blocking out sunlight and giving its base a gray color.

Clouds may also look gray not because there’s not enough light passing through it, but rather it is simply hiding in the shadow of a nearby cloud which, more often, can be much bigger and opaque than it is. A cloud can be technically white under certain circumstances but will look gray from our point of view because of the shadow.

Let’s recap everything we’ve covered so far: clouds are white because sunlight passes through water droplets, relatively large particles that scatter light equally and thus preventing other colors in the spectrum from standing out. However, when light doesn’t pass through certain points of a cloud, that part takes on a darker color.

This also explains why clouds are dark gray or sometimes black when it rains. While clouds are forming in the sky, they have a certain amount of water droplets (a few billion), but they don’t rain down immediately because droplets are up to a thousand times smaller than raindrops and aren’t heavy enough to precipitate.

But if you took a plane and flew over a raincloud, you would see that the top parts are still white, even as it rains.

Clouds at Different Times of the Day

The same concept applies to clouds at night. Because of the lack of sunlight, there’s no light to pass through the clouds, so from below, we see totally black clouds. However, like rain clouds, this isn’t totally black.

Because there is some sunlight reflected from the moon, this sunlight (around 3 to 12 percent of it) still bounces off to the top of the clouds. If it were a cloudless day or there were cirrus clouds at night, you can see that the clouds are partially white or at least grayish-white under the moonlight. But on nights where the clouds are puffy, you may not be able to see the parts of the cloud that are white even at night.

During sunsets or sunrise, the sun’s low position in the sky affects the way sunlight travels through the atmosphere. That’s why you’ll notice that, during this time of the day, the sky is more red-orange than blue, and why the same also applies to the clouds.

Given the sun’s position, sunlight has to travel through more of the atmosphere. Because of blue light’s shorter waves, it is easily scattered and deflected, giving way to red and yellow light to reach earth faster. Eventually, blue light can enter the atmosphere and start overpowering red and yellow light while correcting the cloud colors to make it white, but during this time, we see a different colored sky and clouds.

To recap everything we’ve discussed: clouds’ colors are dependent on sunlight, its density allowing light to pass through it, the time of day, the sun’s position, and its position relative to other clouds.

While a change in clouds’ colors can mean many things, this is helpful if you want to determine the weather and see if it is going to rain in your area. A normal day without rain should have a sky with mostly white or light gray clouds. But dark gray or blackish clouds before sunset suggests that the clouds are getting too heavy with droplets and could soon start to rain.