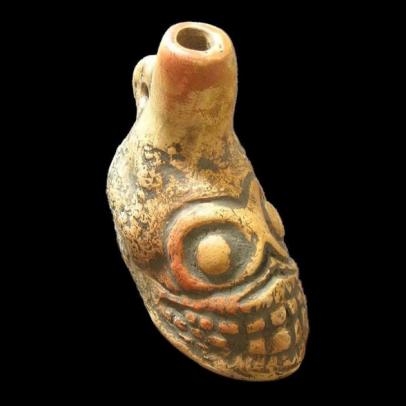 In 1999, archaeologists studying the ruins of Aztec city-state of Tlatelolco stumbled upon a surprising discovery: a 500-year old skeleton with two, heretofore-unknown objects. These objects sent chills down the archaeologists’ spine because of their resemblance to small, human skulls.

As the archaeologists took the objects and cleaned them up, they realized: these are, in fact, small clay whistles that resemble human skulls. At least it wasn’t real bone!

However, the researchers were at a loss: these skull-shaped whistles were authentic enough, they just didn’t know what it was for. Despite all we know about the Aztec culture’s bloody, macabre, and down-right violent and frightening history, there were almost zero references to the whistles they found in Tlatelolco.

In a questionable, but ultimately harmless, move that could have easily been the plot of The Mummy 4: Mas Caliente, the researchers decided “hey, let’s see if the whistles make sound!”. After deciding which lucky intern gets to press their lips in the hundreds-of-years-old ceramic skull instrument, the scientists finally were able to produce a sound.

And it was absolutely terrifying.

What Is the Aztec Death Whistle? 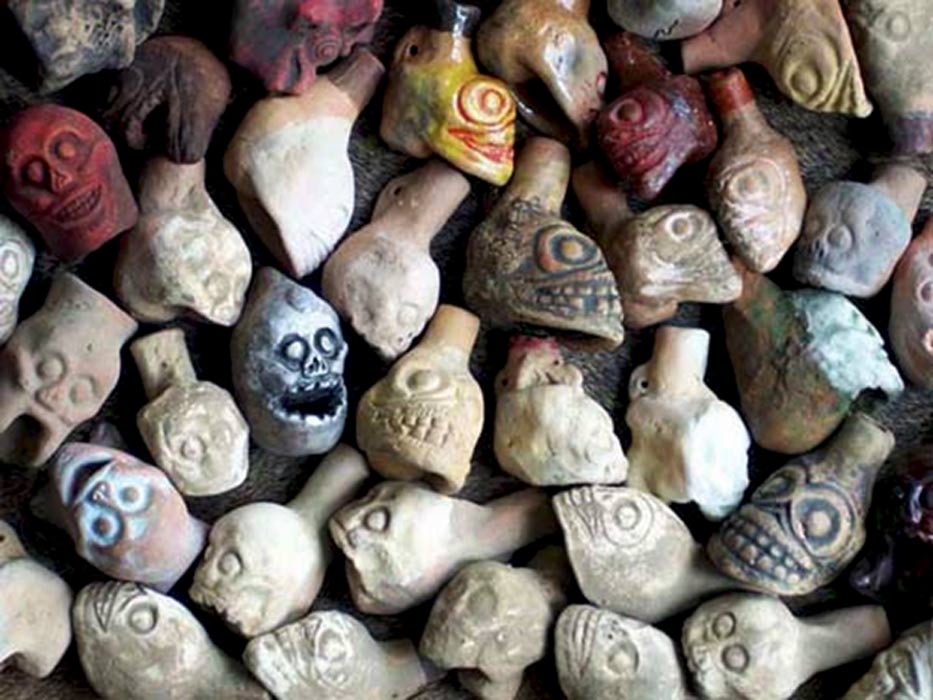 The sound produced by the skull instrument was described by researchers as sounding like “a shriek of death”, giving birth to the instrument’s moniker: the Aztec Death Whistle. Despite authenticating the whistle as being from the Aztec hegemony of Mexican history, scholars and scientists still have no idea what the purpose of these whistles were, other than producing the soundtrack for Aztec nightmares or what we like to think the Executioner Wasp sounds like.

The first Aztec death whistles had been unearthed in other ancient Mesoamerican sites, usually ruins and other locations related to the Aztec cultures. An official description of the Aztec death whistle, however, wasn’t completed until 1971, when historian José Luis Franco unearthed a few in his studies of the ancient peoples. However, it wasn’t until the late ‘90s that someone actually decided to put lips to the whistle and blow. The absolute mad lads.

While Aztec death whistles were more or less known to historians, the find of ’99 was special because it was the first time that an Aztec death whistle was found with other objects and, more importantly, found in the presence of human remains. That being said, while the corpse was found clutching the death whistles, their purpose wasn’t clear: was it ceremonial? Did it pertain to Aztec mythology, perhaps? Will it haunt my dreams forever?

What Were the Aztec Death Whistles Used For?

Despite their widespread presence in Ancient Mesoamerican sites, and despite their extremely interesting (albeit terrifying) effects, Aztec death whistles were treated as mere curiosities for decades, with many of them being packed deep within museum warehouses, hastily dismissed by early historians as simple toys with little to no cultural significance.

But the find of ’99 in Tlatelolco changed all that, kicking off more than two decades of research into these tiny, shrieking abominations that persist even to this day.

But what makes the Tlatelolco death whistle so important? Well, as we all know, the Aztecs loved sacrificing people. Like, that’s just their whole shtick in the annals of history: need rain? Cut out someone’s heart. Praying for the bountiful catch? Chop a head off. Go ahead, the Aztecs seem to say, you can get whatever you want in life with just a little sacrifice if you know what we mean wink wink.

Because of this culture of ritualistic sacrifice, people who were sent off to become spiritual meals for the ever-starving Aztec gods were considered to be special, even holy. Any person sacrificed to the gods is often buried with the highest honors, which is the least the Aztec priests could do, really (other than, y’know, get them drunk off hooch and/or get them really high on Amanita Muscaria or DMT).

This means that anything buried with that person is going to hold some spiritual significance. Studies of the Tlatelolco remains point to the skeleton coming from a 20-year-old man with his head lopped off. His remains were found at the foot of a temple dedicated to Ehecatl, an important Aztec deity concerned with bringing rain and wind.

Even more, researchers disagree, claiming that it was actually a sort-of war horn, with soldiers carrying these into battle so as to frighten the enemy and bolster their troops. Graham Hancock hasn’t weighed in, but knowing him and his body of work, you already know what he’s going to say about it (hint: it’s probably aliens).

Foregoing any sort of written codex, ancient hieroglyphic, or any other kind of clear instructions as to the nature of the Aztec death whistle, the only thing historians can do is guess. However, while historians and archaeologists were busy arguing whether the scary Aztec whistle was used to honor death gods or terrify enemies, musicians like Xavier Quijas Yxayotl and archaeologists like Arnd Adje Both, were more concerned about how the Aztec death whistle can produce such frightening sounds.

Their research propelled the Aztec death whistle to popularity, with the wind instrument even making a cameo in the 2007 film Apocalypto. In fact, walk down any marketplace in Mexico, and you’re bound to encounter some form of the Aztec death whistle, whether they’re cheap recreations or hand-carved replicas.

Whatever their purpose, one thing is clear about the Aztec death whistle, they’re a 500-year old mystery that continues to excite, perplex, and often frighten, researchers as they delve deeper into the even more mysterious Aztec peoples.